“My boat has all the comforts of home, it’s just noisier,” jokes fisherman Neal Pike of Seabrook, New Hampshire as he pops in the first DVD of the morning at 4:30 am.

On his 42 foot ’85 Novi, Sandi Lynn, which he bought in 1997 we set out in search of whiting, the plan for the day being 2-3 tows for about an hour or more each.  This time of year Neal targets whiting, herring, mud hake, and an assortment of other bait fish used by other fishermen as well as lobstermen.  “I fish all year round,” says Neal, “I try not to fish 7 days a week, but sometimes it just works out that way.”  Neal typically fishes with one other deckhand onboard, and as of lately, that has been his son, also Neal Pike, who’s been fishing with his father on and off for as long as he can remember.  He shares one memory of his father cutting a pair of skins, or fishing overalls, at the knee so they would be his size.   When I ask Neal if he has any other children, he jokes, “When you get perfection, you just stop.”  His son, a law school graduate who’s had difficulty finding work in his field, lets out a laugh and continues pulling on his skins in preparation for the first tow of the morning.

First trawl of the day 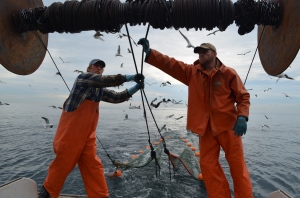 First trawl of the day

When asked why he fishes, Neal responds, “I love it, I really do.  I just like being out here on my own.”  He pauses to reflect, “It used to be a lot of fun, but the government’s slowly been taking all the fun out of it.”  Neal Pike has been fishing since high school, starting in 1975.  By the age of 23 he had a boat of his own, with which he started out lobstering and later switched to dragging.

He describes fishing as being different than what it used to be.  “You have to be computer-smart now, it never used to be that way.”  With the system currently in place, all NH commercial fishermen are required by regulations to notify the government 48 hours before they plan to fish, often making it difficult for many of them to plan out their work week.  “I used to get up, and see if it’s a nice day, and then go,” shares Neal.  “Now I have to give 48 hours notice.  The future of fishing is not good.”  Neal feels mismanagement is to blame, using the overabundance of dogfish as an example.  “It didn’t used to be that way,” he says with regards to dogfish.  “People always say fishermen need to be held accountable, while management is not.  They’re above the law.  Fishermen aren’t to blame anymore.”

Some fishermen have baitfish accounts, and get billed later…

When asked what Neal does for hobbies he responds, “I fish…and I like to ride my motorcycle, a Honda Fury.”   Neal Pike’s catch is distributed outward via Yankee Cooperative.  Most of his baitfish are used locally, while the whiting is shipped all over, and most commonly used  for things such as the infamous fish sandwiches or fish sticks that can be found at various establishments around the country. 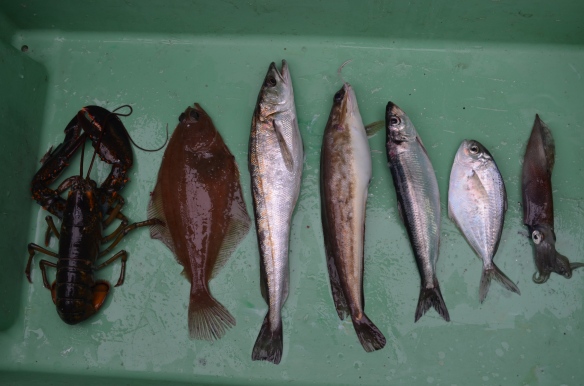 Given the opportunity to say anything to NH seafood consumers, Neal says, “Thank you,” and I laugh at the simplicity of his response. He looks my way and continues with a smile. “No really, we appreciate it. If they didn’t buy our fish we wouldn’t make it. That’s the truth.”